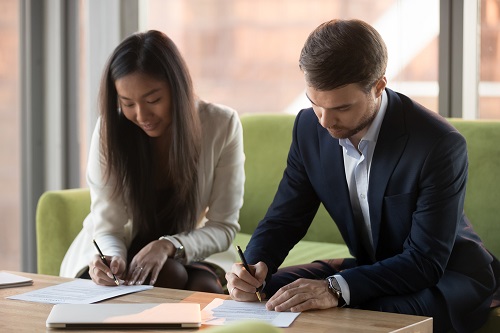 Some people assume all they must do is write out the agreement, get it notarized, and it is legally enforceable should the relationship end. Yet, this is not always the case. If the marriage contract or cohab agreement contains aspects that are excessive or those that would give the other party an unfair advantage, then they are not always enforceable.

To illustrate, the marriage contract states that if the relationship fails, for the noncustodial parent to have access and visitation, they must be willing to not claim any marital assets acquired during the marriage. As you can imagine, the Courts would find this stipulation creates an unfair advantage for the custodial parent.

Furthermore, matters relating to child custody and access are handled separately from those regarding the disposition of marital assets. Essentially, this part of the agreement would not be enforceable.

Keep in mind this is just one example to demonstrate why it is vital to obtain assistance from a family law lawyer when writing such contracts and agreements.

What Can Be Included that Is Legally Enforceable?

Couples can choose to include a variety of topics and stipulations in their marriage agreements and cohab agreements such as:

In general, couples can include anything they feel important in their marriage contracts and cohab agreements similar to the agreements that must be reached during divorce proceedings.

At What Point Should a Lawyer Be Involved?

Couples are free to create their own marriage contracts and cohab agreements. A lawyer should be involved to review the initial draft to verify its legality. You should also consult with family lawyer when you are not sure what you should or should not include in the contract or agreement.

Having a lawyer review and assist with the creation process ensures the contract or agreement will be enforceable should the relationship fail. For help with your marriage contract or cohab agreement, please feel free to contact Davies Law Firm at (613) 688-0462 to schedule an appointment with an Ottawa family law lawyer today!