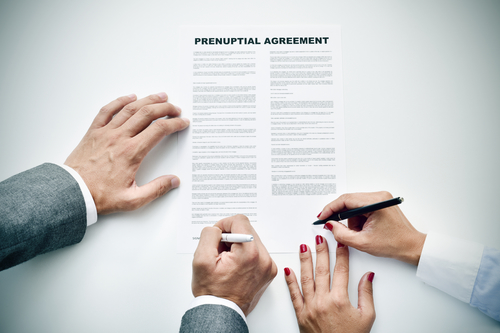 One common question people have about divorce proceedings is: “what will occur when there is a prenuptial agreement” – known in Ontario as a Marriage Contract- “between a married couple upon separation? How does such a document change the normal application of family law legislation?”

If the marriage contract was prepared by and executed through a qualified family law firm, such as Davies Law Firm, it is considered a legally binding contract and enforceable as such. On the other hand, if the married couple drafted the agreement themselves, but never had it formally reviewed by an experienced family lawyer, the validity of the document could be challenged during the divorce proceedings.

The purpose of a marriage contract is to serve as a framework for determining the division of assets, property, debt, and other such items, should the marriage end in divorce. People can also choose to include details regarding their children: for example, schooling, religion, and financial responsibilities.

However, certain secondary elements in a marriage contract are not always enforceable. For example, agreements with respect to children are always subject to” the best interests of the child”, a determination that ultimately can be made by a court. Any property, assets, money, investments, and debt that are not included in the marriage contract may be divided between the divorcing couple based on family law- in particular, the principle that, as a general rule, property must be equalized and equally divided upon separation.

For instance, if a couple is getting married and one spouse has significant assets prior to the marriage, a marriage contract could be created to help protect these assets, upon separation and divorce. This is especially important if the party owns a house that is to be lived by the parties upon marriage. A property lived in by a couple who separate might become, under family law, a “matrimonial home” and therefore subject to division unless expressly excluded by marriage contract. It does not matter who owns the matrimonial home.

Another approach for parties who come into marriage with significant assets is to have them execute a marriage contract that states “no division of assets except according to ownership”. In other words, what is owned by the spouse alone before or during the marriage remains his or her separate property. Any assets acquired by the couple jointly during the course of the marriage would not be protected by the agreement and thus would be divided under standard family law rules.

Who Creates the Terms and Conditions of a Prenuptial Agreement?

The couple has complete control over the terms and conditions of their marriage contract. It is designed to be a flexible, legally binding document, which allows couples to address any potential concerns related to the relationship prior to the marriage itself. Agreements can be individualized to fit the parties creating the document. Since the document exempts or changes the application of family law legislation, it is highly recommended that assistance by obtained from a competent family lawyer to ensure the agreement contains the correct clauses to reflect the intention of the party or parties seeking to rely upon the wording of the contract. At Davies Law Firm, we have the knowledge and experience to make sure your interests are protected.

Is a Prenuptial Agreement Only Enforceable If I Get Married?

For more information about prenuptial agreements, or for assistance in creating one, contact Davies Law Firm today by calling 613-688-0462. It is in your best interests to ensure your prenuptial agreement is drafted correctly to avoid having it successfully challenged and set aside later on, should you separate.